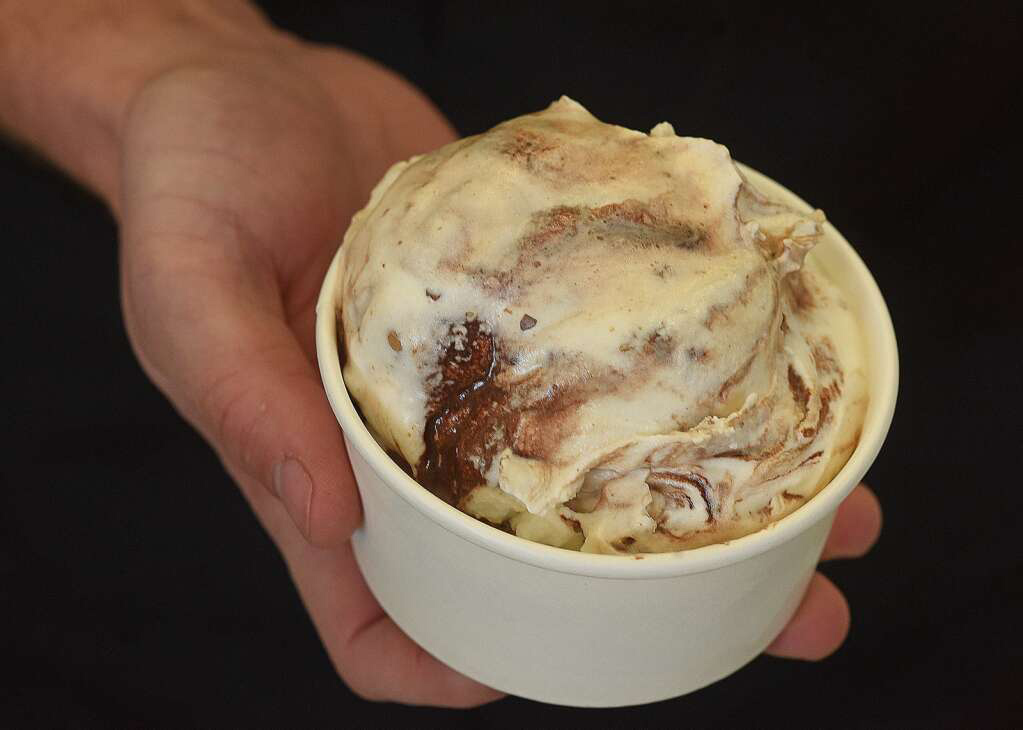 STEAMBOAT SPRINGS — The steady whir of a commercial ice cream maker fills the air inside the commissary kitchen at Dry Creek Park in Hayden.

Chef Jessi Watson does not seem to notice the noise as he works alongside personal chef Sarah Brumley to mix up the base for strawberry ice cream and break up sheets of cookie dough that will be used to make Yampa Valley Ice Cream’s hand-crafted cookie dough flavor.

Last summer Watson, who is a pastry chef by trade, made a Cinnamon Toast Crunch ice cream because that flavor had been his favorite cereal as a kid. He also has crafted ice cream using beer from Storm Peak Brewing Co. and a maple bourbon ice cream using whiskey from Steamboat Whiskey Co.

“The Farmers Market was a great place to kind of see what people like,” Watson said. “I also like to bounce ideas off of other chefs and Jay (Hirschfeld). Jay has got a really good mind for great ideas.”

Hirschfeld, who owns 41North, and Watson have been together from the start of the business in the summer of 2019. Inspired by a local ice cream contest, Hirschfeld wanted to see how ice cream fit into his mission of creating and making better use of locally produced food. Watson, Hirschfeld said, has a passion for ice cream.

“We’re having a lot of fun with it,” Hirschfeld said. “We’re selling it through 41North and then looking for more wholesale orders. We are also hoping to experiment with retail.”

Together the two have come up with a list of more than 250 flavors they would like to try including mainstream flavors like vanilla bean and chocolate along with more creative offerings like lemon basil and orange marigold.

On Monday, a batch of Moose Tracks was turning in the ice cream maker.

Watson, a graduate of the University of Colorado’s aerospace engineering program, spent six years working for an up-and-coming medical device company before returning to his love of the culinary arts and becoming a pastry chef.

He taught culinary programs at Colorado Mountain College and worked as a chef at a kayak retreat in Pucón, Chile, last year. He also worked as a sous chef for some of 41North’s farm-to-table dinners, and when the idea of making ice cream came up, he jumped on board.

“This was something I was going to shut down because I didn’t have the time to focus on it with everything that was going on at 41North,” Hirschfeld said. “He was working as an executive chef in Chile up until March or April of this year but came back and took this thing by the horns and went for it.”

Watson said he uses many of the skills he learned as an engineer to make sure Yampa Valley Ice Cream’s products are top notch. He is a stickler for details and understands the importance of the process when it comes to making the perfect scoop of ice cream.

As a chef, he knows the importance of using high quality ingredients, determining what will taste great and paying attention to things like texture and consistency. He uses his creative side to push the envelope.

The past several weeks he has been creating ice cream for Wild Plum grocers at 2524 Village Drive in Steamboat Springs, which is now offering Yampa Valley Ice Cream in flavors like Big Iron Coffee Crunch, Birthday Cake and Cookies and Cream.

“A real focus of ours is to bring in those unique items that kind of set us apart from other locations and also support our local businesses,” said store manager Katie Stassen. “Yampa Valley Ice Cream meets all the criteria for our store. It’s delicious, and it’s local.”