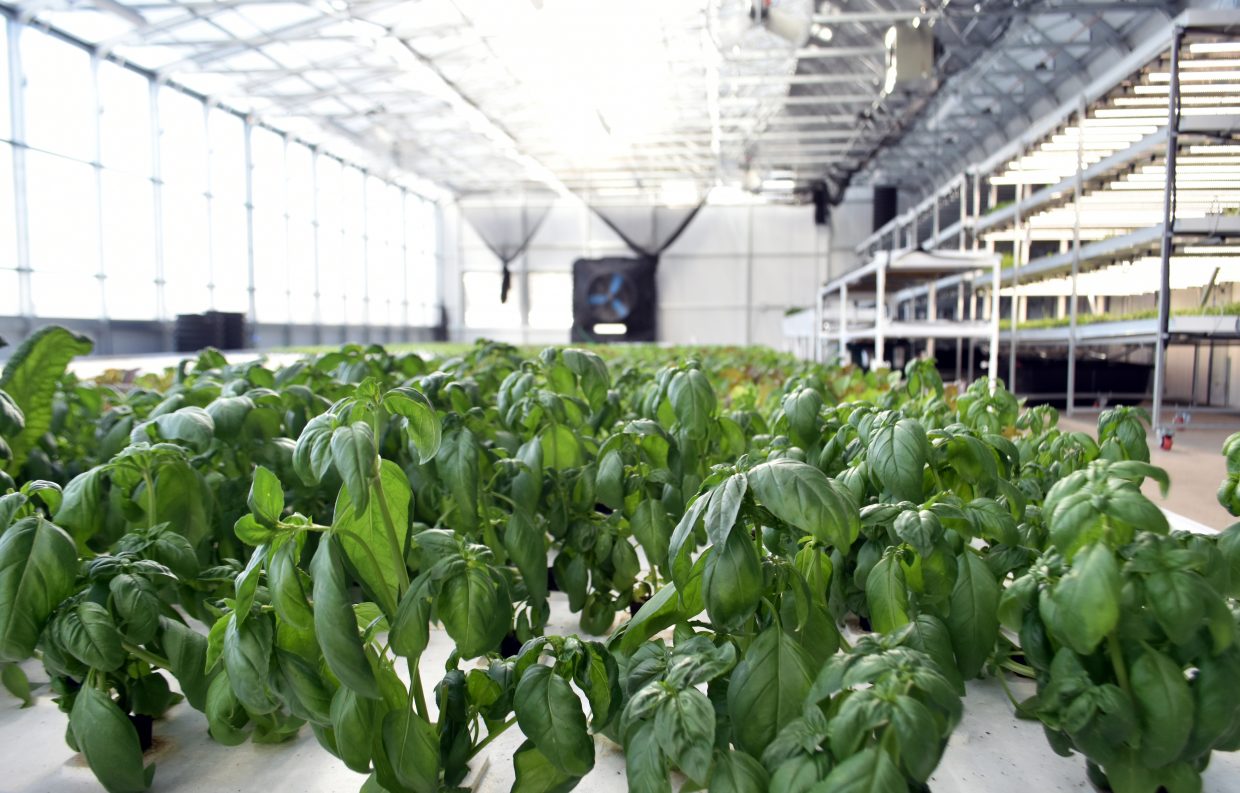 HAYDEN — 41North’s vegetables are fueled by the sun — and some fish poo converted into aquaponic fertilizer.

At the new solar aquaponic farm in north Hayden, garden operator and CEO Jay Hirschfeld hopes to sell his tilapia, microgreens, herbs and vegetables to restaurants in Steamboat Springs.

Soon, he also wants to sell some tree fruits, but, first, his olive, fig, lime and other fruit trees need to mature.

“This entire building is its own ecosystem, and the whole game is balancing out that ecosystem,” Hirschfeld said.

The ecosystem loosely works like this: Hirschfeld feeds the fish. The fish grow and excrete waste until they are large enough to eat. Humans eat the fish, while bacteria eat the fish’s waste.

In the water, bacteria convert components of the waste into nitrite, which is a nitrogen compound plants can use. The bacteria are removed, and the nitrate-enriched water makes its way through the greenhouse to the plants. The nitrate fertilizes the plants, which grow into more food for humans.

Fertilization and water are automated in Hirschfeld’s system, which is Wifi enabled. His smart phone can control many functions in the greenhouse.

The name, 41North, comes from Hayden’s approximate latitude. It’s important to Hirschfeld’s operation because the greenhouse is built at a 41-degree tilt in order to make the most efficient use of the sun’s rays in the passive solar greenhouse.

“We basically get hit by the sun perfectly,” Hirschfeld said. “The light comes in, and because we’re not a typical a-frame, all of that light energy stays inside of our greenhouse.”

The greenhouse is also heated and cooled using the sun’s cycles in a system called a climate battery. Each morning, a fan pulls air heated by the sun to store it under the earth. Once the greenhouse cools off, the fan pulls the hot air back up, storing the cold air beneath the ground.

This cycle of warm and cold air is repeated to keep the greenhouse at the ideal range of 55 to 75 degrees Fahrenheit.

The cooling mechanism is supplemented by an evaporation cooler, which is basically a mega-swamp cooler. A fan blows over water in the aquaculture system. The water absorbs some heat and evaporates, cooling the air.

“To keep this entire solar structure cool would be ridiculous with AC,” Hirschfeld said.

Eventually, he said he hopes to supplement power to the facility using solar power. If he’s able to power the entire operation from this energy alone, he believes it would be the first solar-powered commercial farm.

Hirschfeld plans to offer workshops and tours of the aquaponic farm. His first tour will be Oct. 6.

So far, some of his produce is being used at Harwigs and Low Country Kitchen in Steamboat. Right now, he’s talking to chefs to find out what they would like to see in addition to what’s already available in the market.

“We’re trying to add to the capacity of the Yampa Valley,” he said. “Rather than be like ‘Oh you’re doing wheat grass? We’ll do wheat grass too.’”